I believe it was Cheap Trick that had the song with the lyric, “Surrender, but don’t give yourself away” but it seems like that is exactly what is happening as Facebook is going forward in its plans to create its own cryptocurrency for use across its platform and other partner platforms. While we are invited to surrender to a world of convenience and security we also seem to be on the brink of giving too much away. With the creation of a stand-alone currency seems to be running the risk of starting a stand-alone economy. With the global online economy now running almost seven trillion dollars imagine the power that a corporation could wield in world politics. With a current value of almost 2.3 billion, they could become powerful enough to begin to dictate financial policy in the same way Walmart dictates when it will receive certain merchandise to its loading dock. While we have seen the effective ways that savings and loans can regulate themselves into a $160 Billion dollar bailout, and later banks almost bankrupted the economy only to get a $700 billion bailout, what could possibly go wrong with a single industry dominating online currency and online transactions? Let us embrace our inner Alfred E Neuman- why worry? A rising economy lifts all boats even at the cost of flooding the low lying ports. So sit back, relax and enjoy the ever warming bathwater. 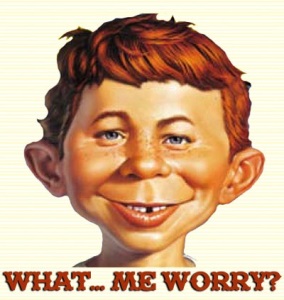